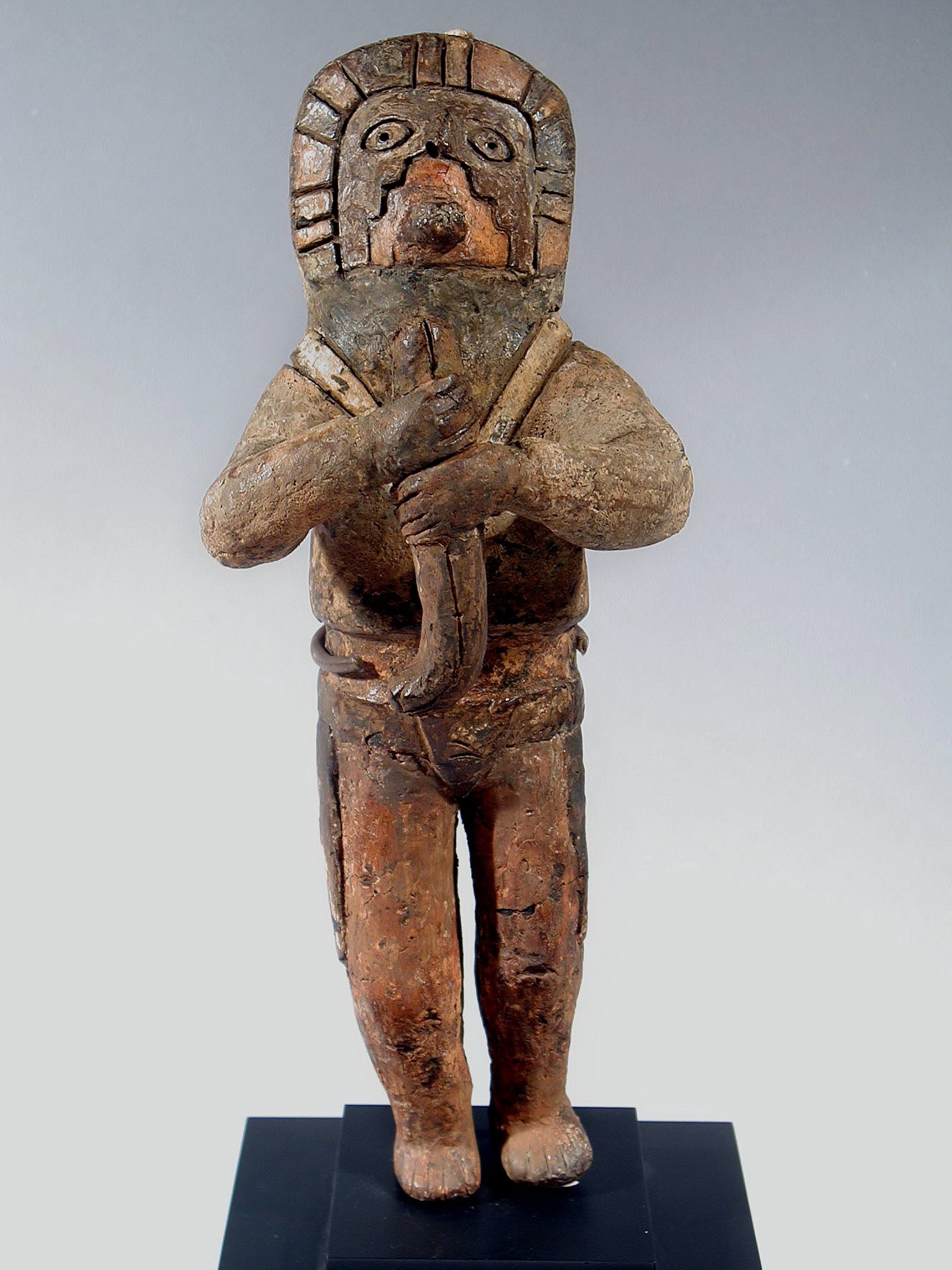 Carved wooden effigy of a standing shaman holding a flute or serpent in front. The shaman has puckered lips as if he is whistling and appears in a trance like state. He is wearing a headdress, v neck tunic and belt with two long devices hanging down along the outside of each leg. On the back of the belt is a "U" shaped device of unknown use. From the top of the head emeniates a bone tube which has been broken. A similar shaman's face is illustrated in PRECOLUMBIAN ART OF SOUTH AMERICA by Alan Lapiner fig. 13. Wooden effigy figures are extremely rare and do not survive well. The left leg was broken off and re-attached and the evidence of age was apparent. 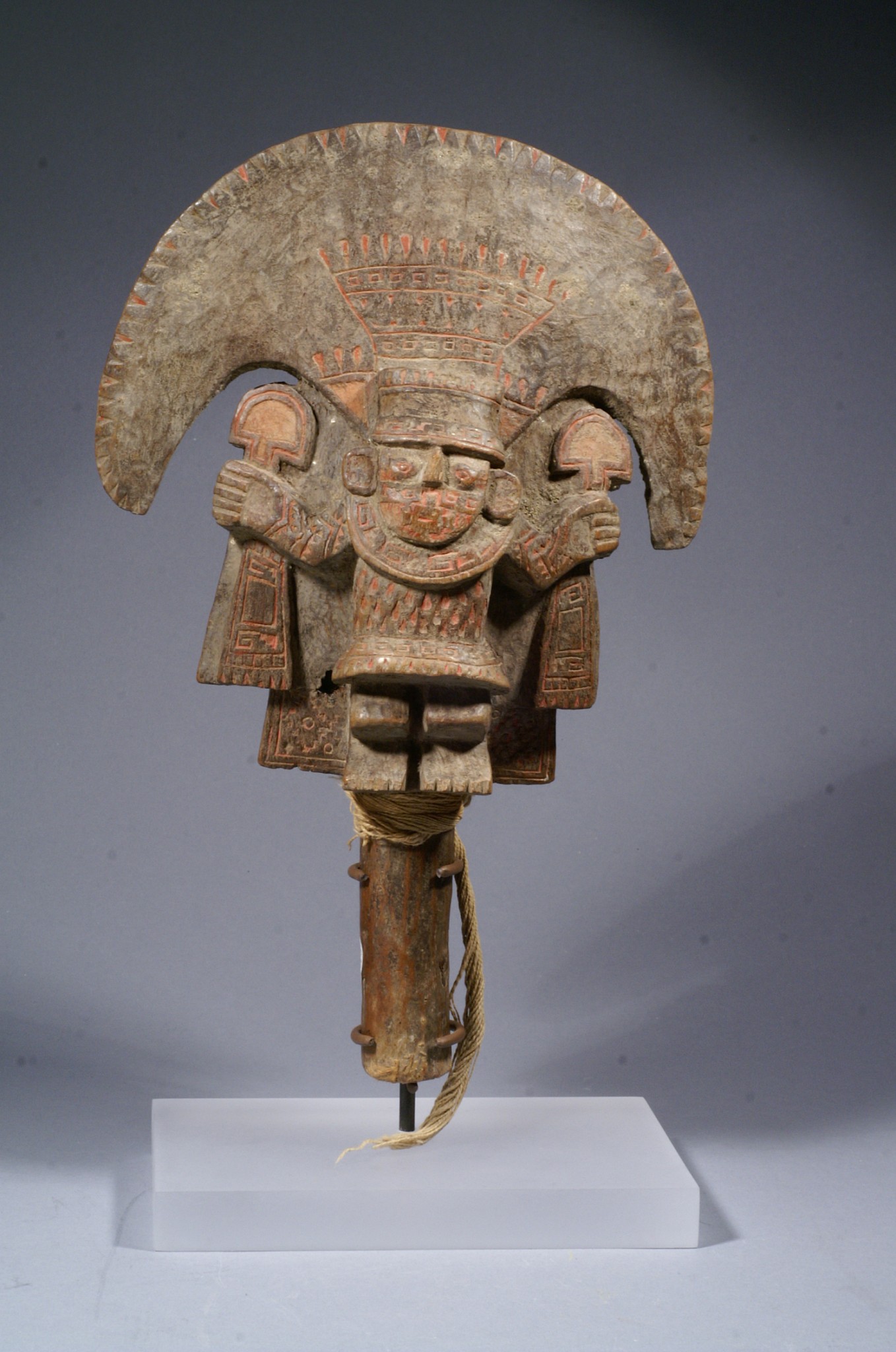 A large and well carved wood mirror back with a dignitary in full regaila wearing a nose ring and a large crescent shaped headdress. His face is also decorated with a tattoo. There is original cotton string bound to the handle. The pyrite mirror in the back is ancient but not original to the piece. A similar elaborate mirror back from the Chimu is illustrated in Alan Lapiner, "Pre-Columbian Art of South America" (1976: #625) That particular mirror was sold at Sotheby's auction May 19, 1993 for $30,000. My mirror was examined by Robert Sonin for authenticity May 25, 2006 Photo roll-out #3305 and #3306.

Peru, Colonial Kero in the Form of a Feline Head

Originally the Inca used these carved vessels for ceremonial and festive occasions. This tradition lasted through the late 17th century. Shaped keros were introduced in the Colonial period and their design is limited to 3 specific types of animal motifs: alpaca, llama, feline. They were also made to resemble Inca lords. Keros were made in pairs; and the pair to this Kero is at the Yale Peabody Museum and is illustrated in “Machu Picchu: Unveiling the Mystery of the Incas” on p.212. The vessel may represent an ocelot rather than a jaguar or puma because of the pelage markings, which indicate that it represents a tropical forest feline. The back of the kero is carved and painted with a scene depicting a battle scene between Inca troops and tropical forest warriors known as the Chunchus - the last group that the Inca conquered. The waxy colored inlay pigments, known as mopa-mopa, came from Pasto, Colombia and the carved wood is mainly from the Escallonia genus of shrubs and trees. A similar kero is illustrated in “MACHU PICCHU: Unveiling the Mystery of the Incas,” on pg. 212. This kero was formerly in the collection of Nelson Rockefeller and was sold at Sotheby's on November 5, 1980, in lot 75. 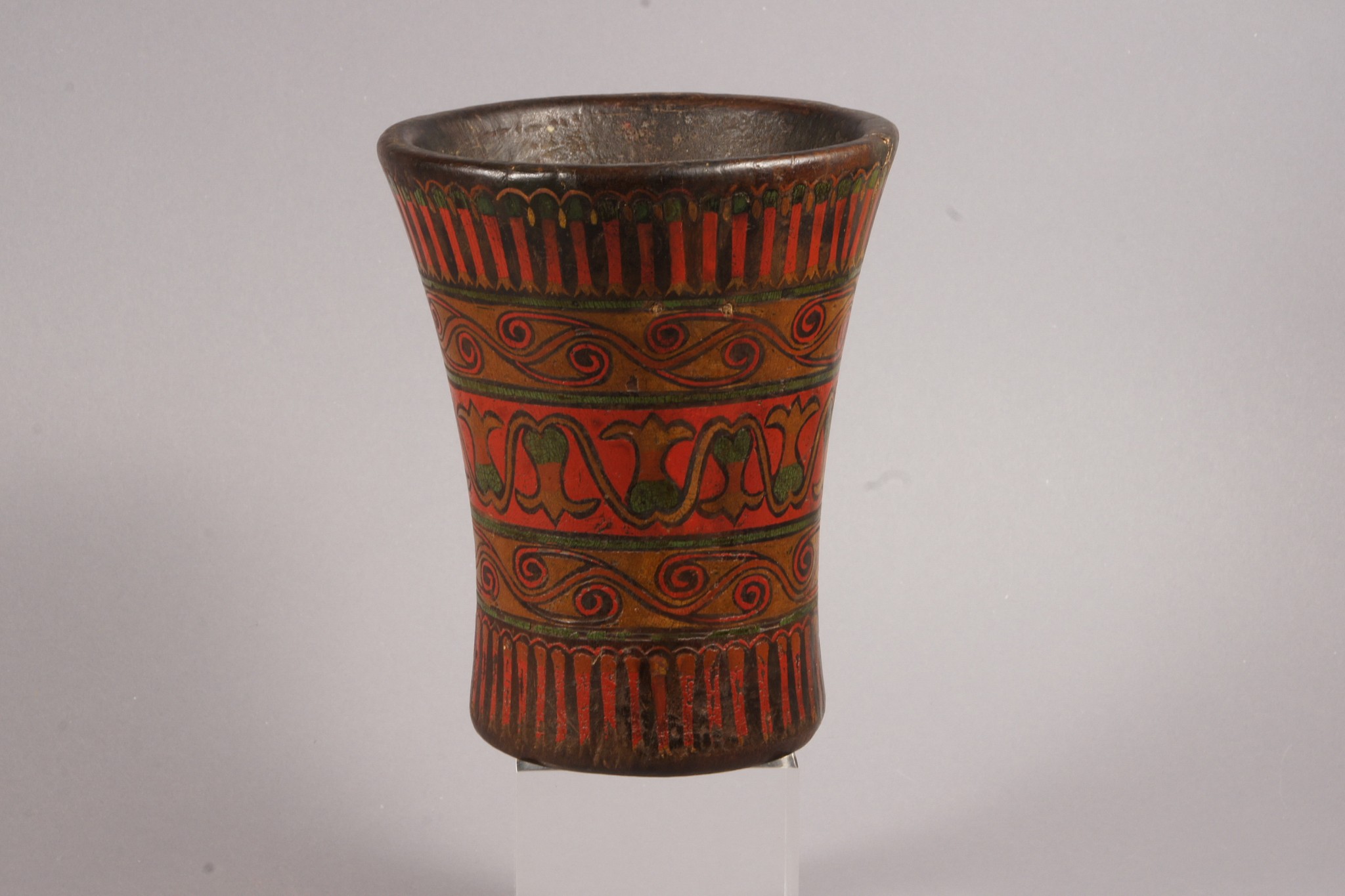 Decorated in five registers with flowers, the pair to this vessel is in the Museo Inka, Universadid Nacional del Cuzco and illustrated in Ochoa et. al. "Qeros: Arte Inka en vasos ceremoniales" (1998: 267). Some were made in pairs, particularly in the Colonial period. Qeros were festive drinking cups that Inca rulers, governors and other state officials used in ceremonies, and they were often gifted from one lord to another. Hans Monheim collection - Aachen Germany since 1950's. 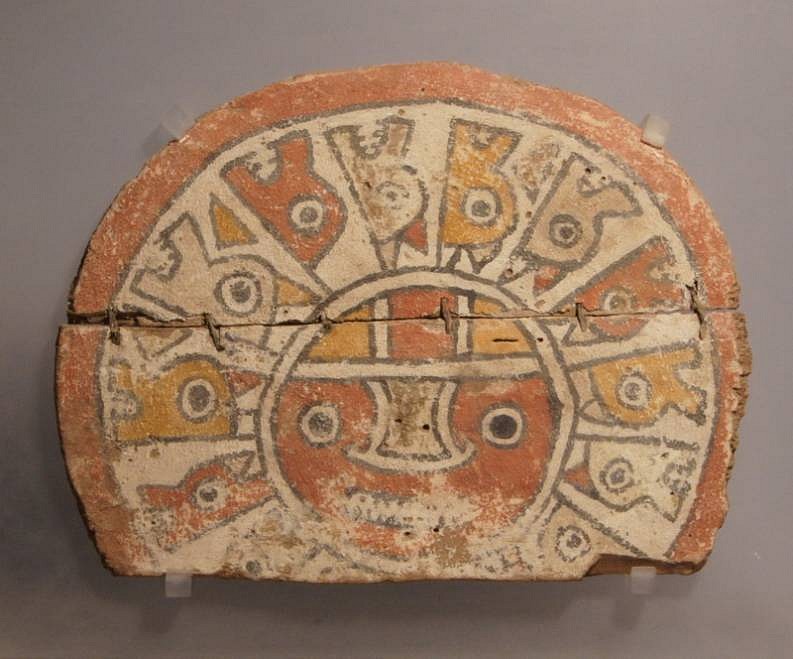 A well painted wood disc depicting a sun with serpents heads emanating from the center circle. The painted surface is stucco-like and in excellent condition. The disc has an ancient repair of a clean horizontal break through the center. There are four attachment holes in the center as well, which implies that it was worn either as a headdress ornament or a pectoral. This is illustrated in CHANCAY. The Merrin Galleries have illustrated a painted textile with the same sun face motif and emanating serpents on a poster for an exhibition. 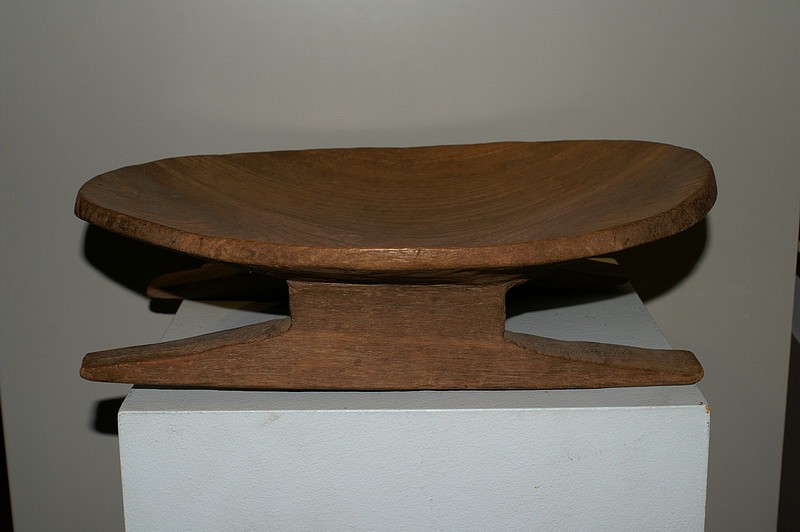 Tianas were originally made from a single block of wood during Inca times (1250-1500AD). These wooden seats and other specified goods were limited for use by the Inca class. Tianas continued to be used well after the Spanish conquest. A well known Tiana survives in the Berlin Museum. 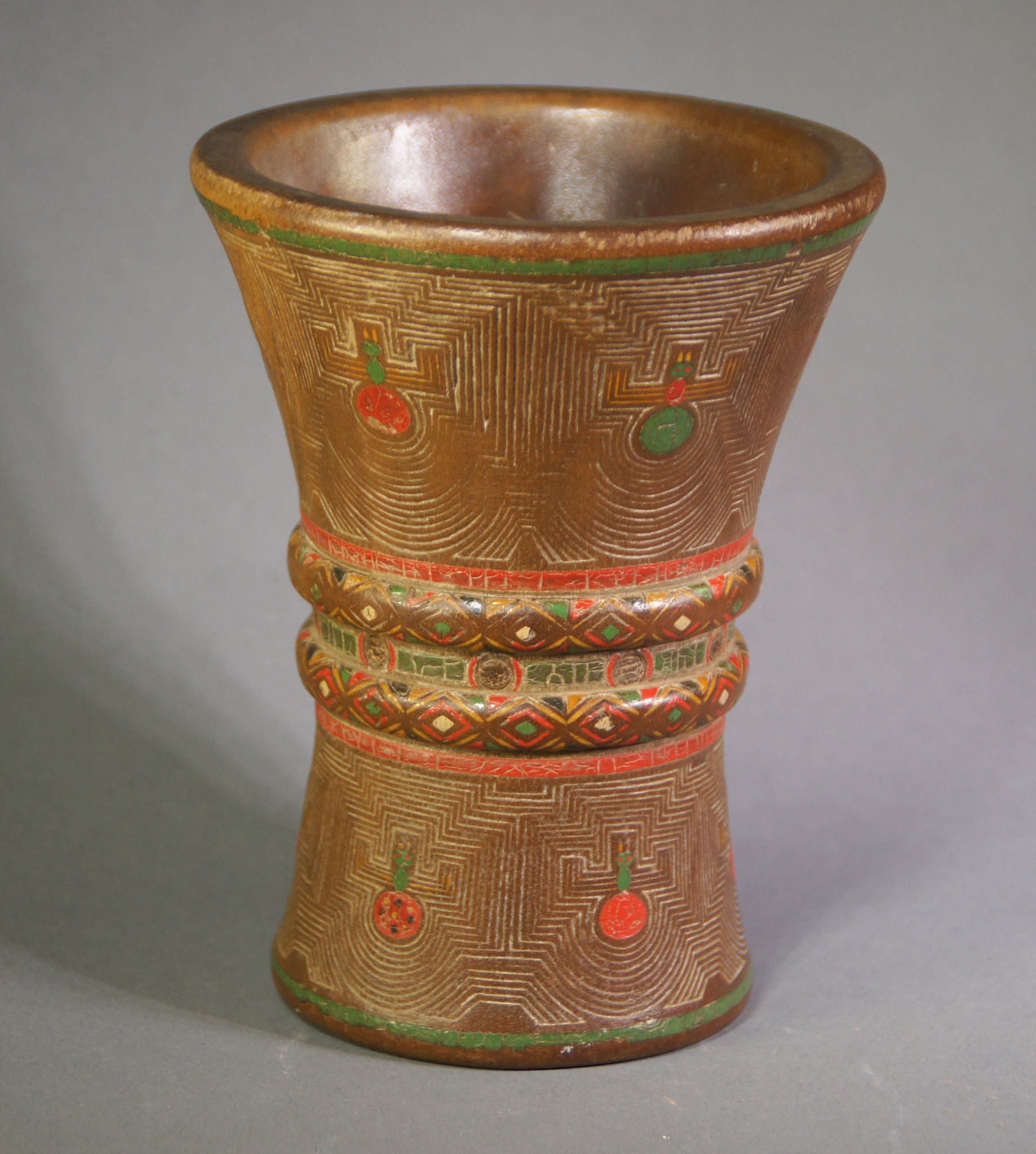 This kero is an extremely fine example of incising technique. The overall surface is incredibly intricate. The incision lines mimic the natural geometry imposed by the repeated motif of an abstract spider moving vertically on the upper and lower portions of the vase. The creature's body is highlighted with red, yellow and green paint. The central band is accented with patterned bands of diamonds and circles and squares in red, yellow, green, black and white. The rim and base are accented with simple green bands. Such great attention to linear detail and mastery of the incising technique suggests that this is an earlier kero (possibly 16th century). Examples illustrating the incising technique can be seen on p.54 of 'QEROS: Arte Inka en Vasos Ceremoniales', by Jorge Flores Ochoa. This book is part of the Coleccion Arte Y Tesoros Del Peru. 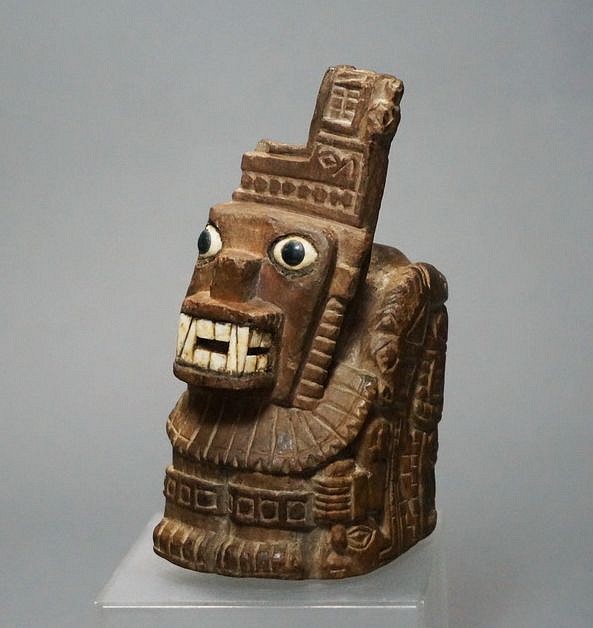 This large wood lime container is carved in the form of a classic Wari decapitator holding a trophy head in his right hand. These containers were used to store lime, which assists the body in metabolizing cocaine alkaloids from ground coca leaves. The opposite side would have had him holding a tumi knife. The decapitator is wearing an elaborate costume with a puma mask and a tapestried tunic with feline profile faces. Below the mask is an elaborate pectoral of trapezoidal plaques. One half of the container is missing, and the inside reveals a storage chamber. The puma is elaborately decorated with classic Tiahuanaco motifs from the Gateway of the Sun. Evidence of inlays in the eye sockets exist. The container portrays a major sculpture in wood for this period. Another lime container in the National Museum of Copenhagen of the same height, 5.75" is illustrated in "Art of Empire, Museum of Primitive Art" - fig. 80.m. There is a chapter in the Peruvian publication Los Dios del Antiguo Peru - Dioses De Pachacamac El Idolo Y el Templo, pages 159-175, which discusses a carved wood idol on a staff. This staff in the book has many elements that are similar to this lime container, specifically the arched serpent and profile face. 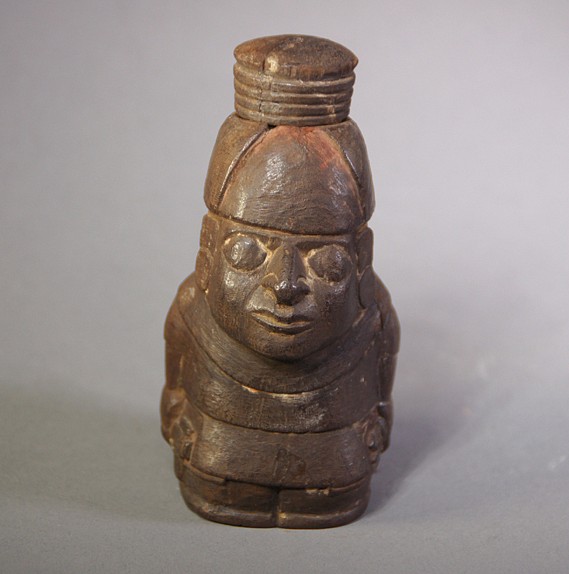 Peru, Large Wari wooden lime container in the form of a seated man

This large Wari wooden lime container is in the form of a kneeling figure carrying an axe in one hand and a group of darts in the other. He wears a circular hat which is also the lid of the container and a pair of earspools. 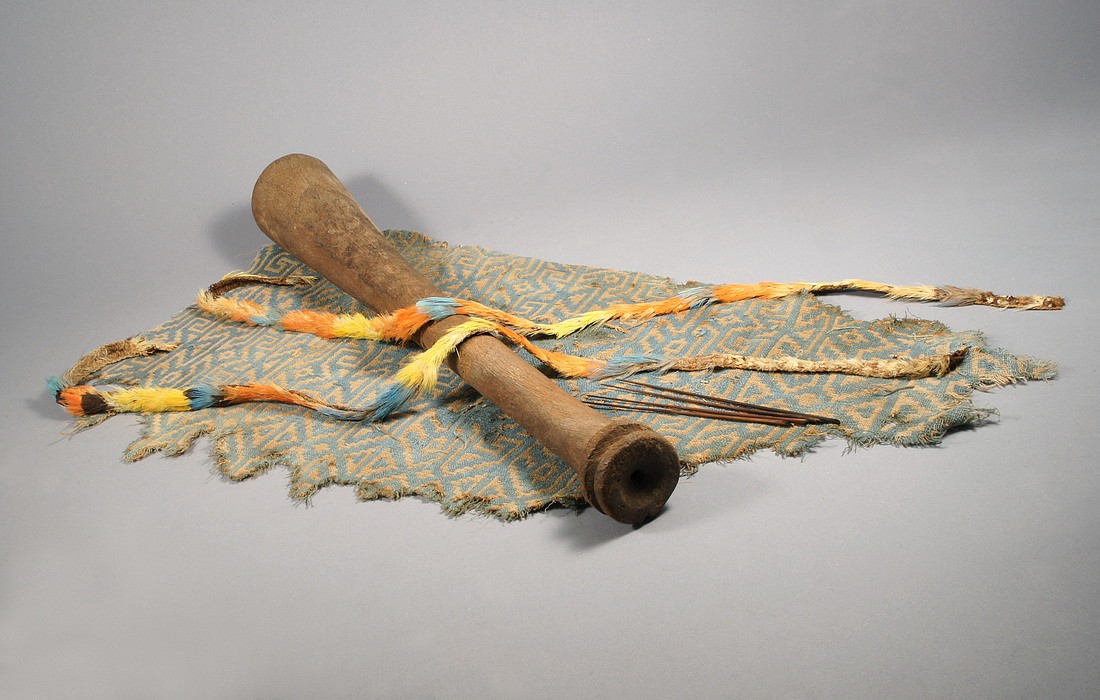 The blow gun is made from one solid piece of wood. It is stone-carved on the inside, and drilled from the narrow center section to the mouth piece. There are very few examples illustrated in the material culture of ancient people using blow guns for hunting, except for one famous example on a Moche mouth ornament, illustrated in the Dora and Paul Janssen collection catalog "MASTERS OF THE AMERICAS" on page 254. In this example, two hunters are using short blow guns to kill birds on tree branches with cactus thorn darts. This particular blow gun was found with a fancy double weave cloth fragment and fine yellow feathers strung together - perhaps to decorate the blow gun or used for camouflage. Tree thorns were also found at the site, probably for use as darts.

These hand-carved ear spools are comprised of three parts: cutout face, flared spool, and back. 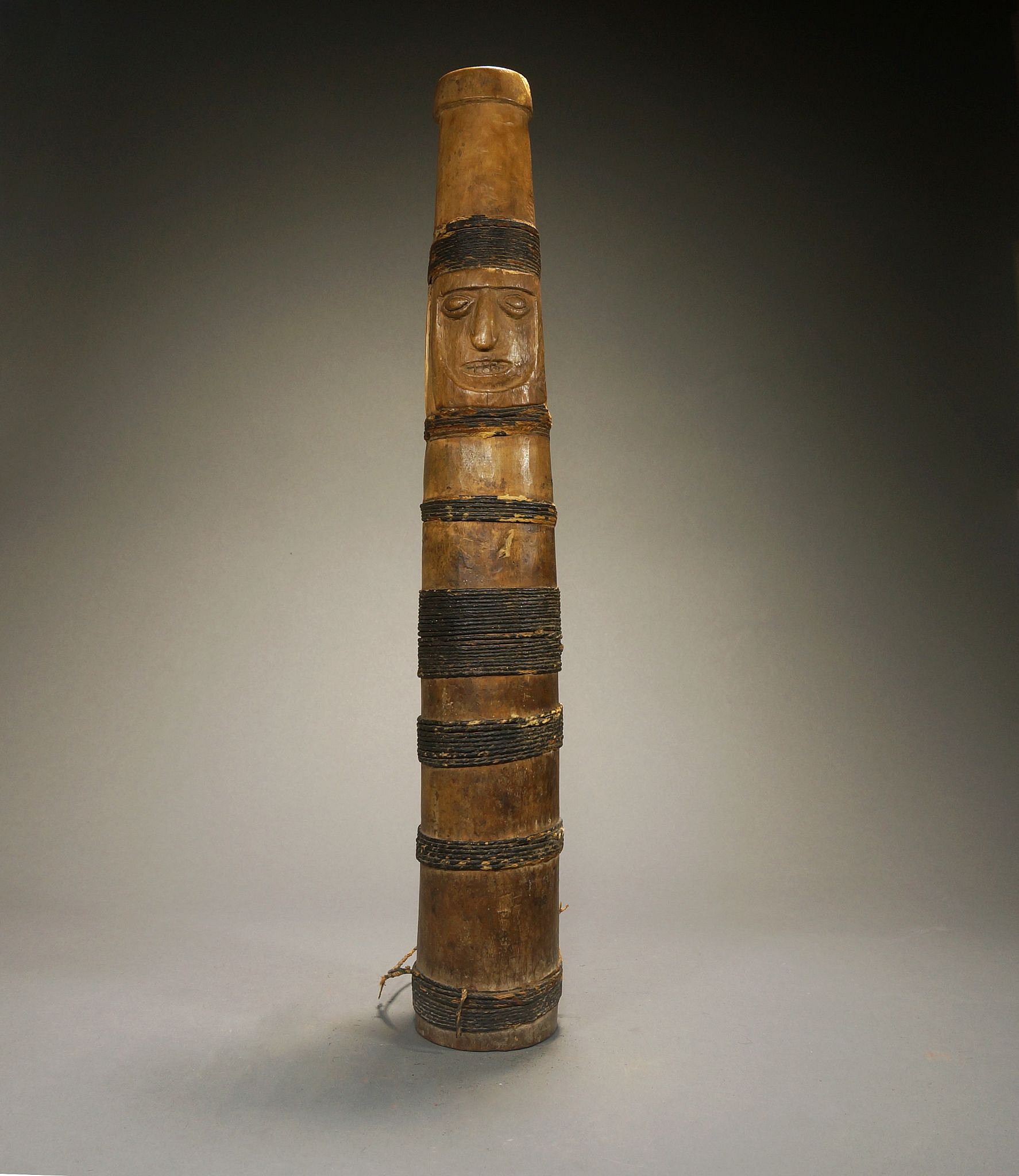 This Wari trumpet has been wrapped in bands with a tar covered cotton rope. It has the typical trumpet pitch. This is a rare object to find so intact. This wood mask with headband has an applied cinnabar decoration with an unusual step design around the mouth. This is an exceptional mask for Peru in that it is well carved in the round with a high degree of realism. Most of the wood masks from Peru are carved from flat slabs of wood with a small nose which is sometimes made separately and attached. Peru, Wari Carved Wood Konopa in the form of an alpaca

Konopas were sacred offering containers carved in the shapes of llamas and alpacas. This example is carved from balsa wood in the unmistakable form of an alpaca, distinguished by its long hair, especially flopping over the eyes. A round cavity was carved into the animal's back for the purpose of holding an offering. Once filled, probably with a mixture of llama or alpaca fat and blood, the carving was subsequently placed in pastures to secure the fertility of herds and the land, both so essential to the ancient Peruvians. Most known extant konopas are from the later Inca period and were generally carved from stone. A wide variety of Inca stone examples are illustrated in "Gold of the Andes: The Llamas, Alpacas, Vicunas and Guanacos of South America," 2 vols. (Barcelona, 1994, Vol. I: 20 and 21). The stone Inca examples of alpaca konopas are from Helmut Schindler "The Norbert Mayrock Art Collection from Ancient Peru" (2000: 320). 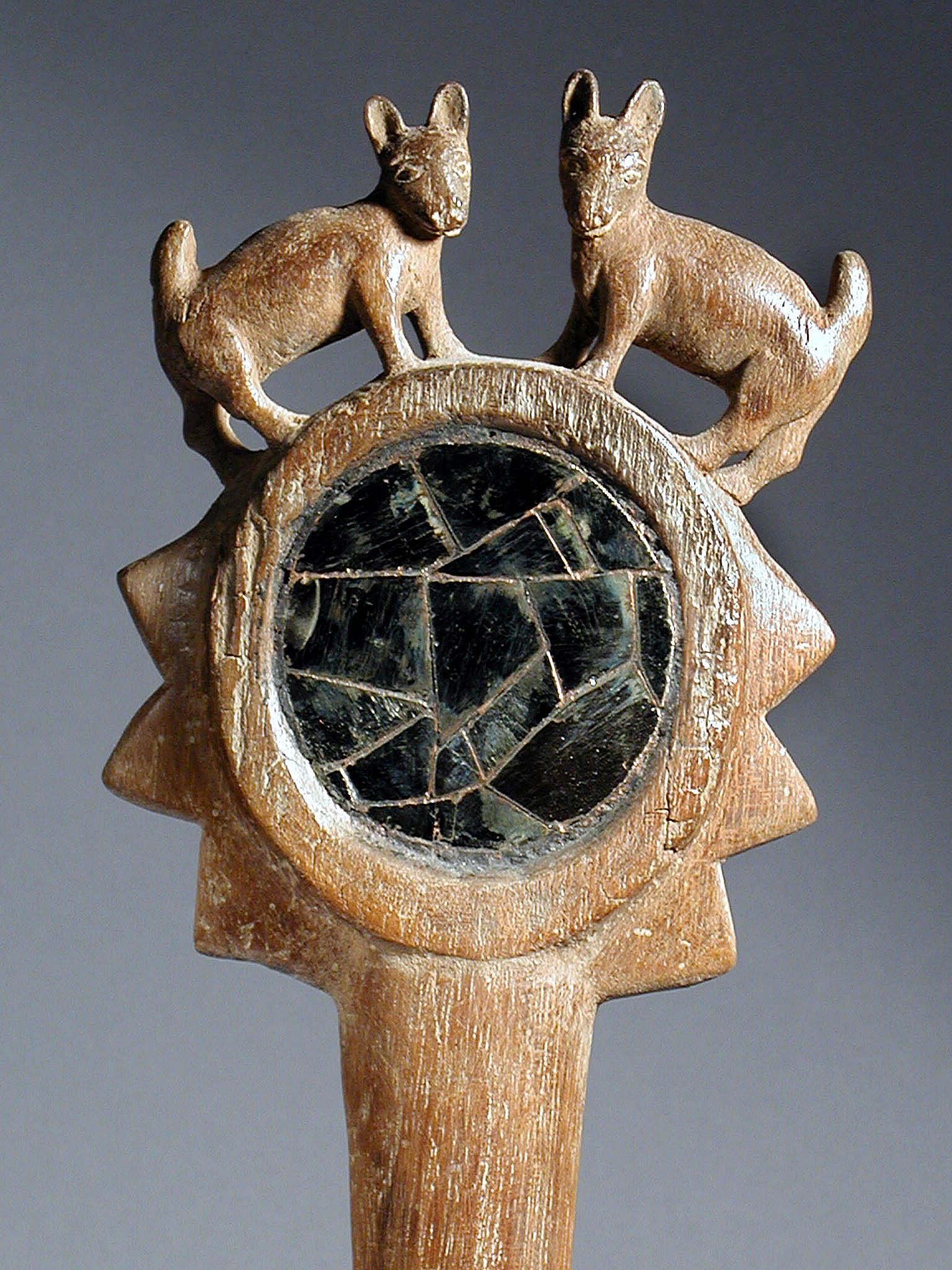 Elegantly carved wood handled mirror decorated with two felines perched on top facing outward. The mirror frame is carved with a mace-like knobs to give an overall impression of a scepter. The verso side is plain.

Tip: You must first enter a valid email address in order to submit your inquiry